Electric pickup trucks are on the horizon, and few vehicles stand to benefit more from electrification. Having maximum torque instantly available is great for hard work, and rechargeable batteries let drivers avoid those frequent, costly trips to the fuel station.
Overall travelling range, charge time, and infrastructure are going to be the biggest deciding factors for whether EV trucks are widely adopted; and these are issues that every single automaker getting into the game has to tackle. There are a lot of companies throwing their hats into the electric pickup truck ring, some from the established old guard, while others are brand new to the world of pickups and the automotive market at large.
Let’s go through the list and see which brands are working on electric pickups, and what we know so far about each one, including when these electric trucks will actually show up in driveways.

[h=2]Ford[/h]We’ll kick it off with the big dog in the room: the F-150. For the 2021 model year, the F-150 is going hybrid, offering a twin-turbo V6 paired with a 1.5 kWh battery pack, though the fully electric version is still at least a year away. Exact timing has not been announced by the brand, but we expect to see the all-electric F-150 sometime in 2021. Ford calls its new hybrid powertrain PowerBoost, a name that could easily carry over to the all-electric F-150.

[h=2]General Motors[/h]GM is taking an interesting tack in jumping into the electric truck game: reviving the Hummer name. Best-known for epitomizing excess fuel usage a decade ago, the new Hummer is going to be all-electric, but it won’t be a brand like before: GM’s electric pickup truck will be known as the GMC Hummer. When it first debuts, the new Hummer will be available only as a truck, though an SUV body style is also in the works.
GMC has also teased some other features on its upcoming Hummer, including removable roof panels, a claimed 1,000 horsepower, a zero–60 mph run in just three seconds, Adrenaline mode, and Crab mode. Putting the truck in Adrenaline mode will probably be the quickest way to launch it, but we’re not exactly sure what Crab mode will be. Crab-walking in a vehicle with rear steering is when all four wheels turn in the same direction to move you forward on an angle, so “crab mode” suggests that the Hummer will have rear steering.
Based on official statements, it appears that the Hummer will be out before the all-electric F-150. GMC says we can expect to see the Hummer fully revealed before the end of 2020, while production is slated to begin in autumn 2021.

Fiat Chrysler Automobiles is taking the opposite strategy of the other two Detroit brands: No electric pickup has been announced, and the next launch on the docket is the 6.2-litre supercharged V8-powered Ram TRX. That truck is sure to be a desert-storming monster, but it certainly won’t be thrifty. An all-electric Ram may well arrive in the future just to keep the brand competitive, but for now, there’s nothing on the slate.

When the Tesla Cybertruck rolled out, it took the world by storm thanks to its angular design and big claims: a tow rating of 14,000 lb, payload hauling of up to 3,500 lb, and maximum ground clearance of 16 inches. The Cybertruck sounds like it will be formidable – depending on how you spec it.
There will be three configurations: a single-motor rear-drive version, a dual-motor all-wheel-drive setup, and a tri-motor option. Base Cybertrucks will sell for $39,900 US (roughly $53,300 Cdn at time of writing), while top-trim versions will go for $69,900 (ca. $93,400 Cdn).
Tesla says that single-motor RWD Cybertruck production will begin in late 2022, so don’t expect to actually see a Cybertruck anytime soon.

Rivian has probably received the most hype and widespread recognition of all the start-up electric pickup companies, showing off its futuristic R1T truck and R1S SUV concepts back in November 2018. Since then, the brand has released a steady trickle of details, like the battery pack lineup, consisting of a base 105-kWh pack, a mid-range 135-kWh battery, and a top-end 180-kWh pack. Range estimates begin at 230 miles (370 km) with the base pack, 300 miles (483 km) with the mid-range option and 400 miles (644 km) with the big battery.
Every Rivian will have all-wheel drive thanks to having a motor at each wheel, which also allows the truck to do a “tank turn,” where it can spin 360 degrees in its own footprint. Air suspension will be available to lift these rigs up to 14 inches – these Rivians should be pretty capable off-road. Towing capacity has been announced at 11,000 lb while maximum payload is pegged at 1,760 lb.
Pricing has been announced: the R1T starts around $70,000 US ($93,500 Cdn) and ranges up to $80,000 US ($106,900 Cdn) for the larger battery pack.
Initially, Rivian said that the R1T pickup would be on sale and in driveways south of the border before the end of 2020, but now it’s looking like deliveries won’t begin until sometime in 2021.

Nikola is also a start-up electric pickup brand, but that’s simplifying what this company is trying to do. Nikola has already shown an electric side-by-side, personal watercraft (PWC), and a hydrogen-fuel-cell-powered semi truck. But in the half-ton pickup world, Nikola is working to unleash the Badger.
It’s a unique proposition on this list as the Badger will be available as a normal battery-electric vehicle, or as a battery-hydrogen-fuel-cell hybrid. A 160-kWh battery pack will be standard on the Badger, while a 120-kWh hydrogen fuel cell can be added on. Range with just the batteries on board is 300 miles (483 km) according to Nikola, while adding the hydrogen fuel cell will give the truck an operating range of 600 miles (966 km), and of course, the capability to refuel in a matter of minutes.
The Badger is supposed to be a 2022 model year truck, so we should see it sometime in 2021 as well.

Bollinger has been hard at work in the bowels of Detroit to bring its B1 electric pickup to market. The simplistic electric truck has been fully revealed, and it has some pretty interesting features, including a pass-through storage space that runs the length of the vehicle.
Pricing for both the B1 truck and B2 SUV comes in at $125,000 US ($167,000 Cdn), netting you a 120-kWh battery. Range for these big, heavy trucks is estimated at 200 miles (322 km). Two electric motors provide over 600 horsepower, while portal axles, lockers, and a low-range transfer case should make the Bollinger amazing off-road.
Bollinger is taking reservations now, though they have not said exactly when the vehicles will be available. The small company was looking for a larger partner to help with production, but it seems that deal has yet to be made.

Lordstown Motors recently revealed the Endurance, another all-electric pickup that is in development. The most unique aspect of this truck compared to the others on this list are in-hub motors, meaning each wheel gets its own motor directly inside of it – Rivian’s design places the motors in a more centralized location between each set of wheels.
Range for the Endurance is said to be 250 miles and pricing for this truck begins at $52,000 US (ca. $69,500 Cdn) with an on-sale date of summer 2021.
Last edited: Aug 18, 2020 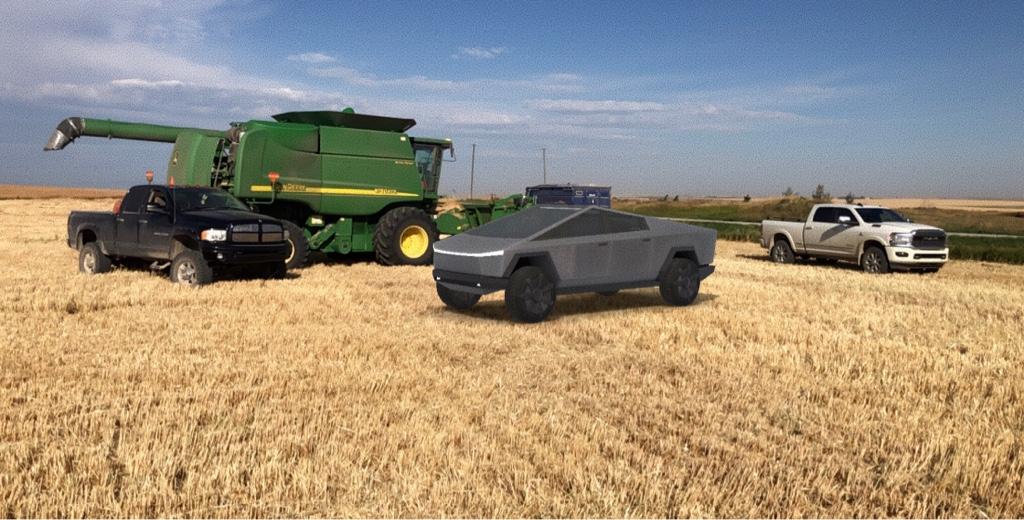 Yeah. I’m also looking forward to it driving itself to town to grab parts as well.

I can wait to hear about the stock e-truck smoking your hot rod the quarter mile! Hahaha

Brownstar said:
I can wait to hear about the stock e-truck smoking your hot rod the quarter mile! Hahaha

Lol. I got a 9000 pound tank that can do it in 10 seconds.....haters gonna hate is right....maybe ill even wear some white oakleys when i smoke those etards out lol. Briwnstar will be in your pants its so fast

2kDoo said:
Cant wait to read about idiot driving away with it still connected
Click to expand...

Hahahaha. You have mastered how to look ignorant with one sentence. Good job.
2

jhurkot said:
Hahahaha. You have mastered how to look ignorant with one sentence. Good job.
Click to expand...

Thank you for the proper use of ignorant... yes i do not understand the problem....your not ignorant to my ignorance

2kDoo said:
Thank you for the proper use of ignorant... yes i do not understand the problem....your not ignorant to my ignorance
Click to expand...

Since an EV is essentially a computer on wheels do you think that the software engineers would allow it to shift into drive while the charge cable is connected?
2

jhurkot said:
Since an EV is essentially a computer on wheels do you think that the software engineers would allow it to shift into drive while the charge cable is connected?
Click to expand...

Wouldnt surprise me if it ever happened. Vw cheated emmisiins, porsche knew about the faulty cars that killed paul walker, many times car manufactures made mistakes. Dodge has a recall where it can slip out of park and goto neutral and crush someone.

2kDoo said:
Lol. I got a 9000 pound tank that can do it in 10 seconds.....haters gonna hate is right....maybe ill even wear some white oakleys when i smoke those etards out lol. Briwnstar will be in your pants its so fast

10 seconds is slow at the tracks I run. Lmfao That's what you get for hotroding a diesel truck I guess

Brownstar said:
10 seconds is slow at the tracks I run. Lmfao That's what you get for hotroding a diesel truck I guess

Tesla family car will run in the tens ffs
Click to expand...

Why would I do that? Goal is to make it faster not slower. I'll leave the "performance" diesels to idiots out in berta
2

Brownstar said:
Why would I do that? Goal is to make it faster not slower. I'll leave the "performance" diesels to idiots out in berta
Click to expand...

Hauling a sled trailer is pretty awesome with a car ? Give our regards to your homie trudope

2kDoo said:
Hauling a sled trailer is pretty awesome with a car ? Give our regards to your homie trudope
Click to expand...

I dont use the race car for hauling the sleds lol

We need to get that pipeline approved asap I can tell the struggle is real out west!
2

Brownstar said:
I dont use the race car for hauling the sleds lol

We need to get that pipeline approved asap I can tell the struggle is real out west!
Click to expand...

You have no idea the struggle. Driving 6 hours to the rocky mountains, snow up to the nuts. Dont you have your own local forum to goto ? Flatlanders.com ? Or worstcaseontario.com ?
You must log in or register to reply here.
New posts

Chevrolet takes another step toward the end of gasoline engines.
2

How EVs will drastically change transportation in Canada