Diesels have long had an image problem. They were known to be smelly, slow, and dirty.

But that picture is very much out of date. Diesels don’t stink like they used to. Many are extremely powerful. And they’re remarkably clean compared to the old days.

For the U.S. market, the major emission reductions were implemented during the 2007 model year, on all diesel engines built after Jan. 1, 2007. Thanks to newly developed diesel exhaust aftertreatment systems, particulate matter was dramatically reduced.

Now that these systems are common and are making their way from dealerships to auto technicians everywhere, it would be good to review the basics of how these diesel exhaust aftertreatment systems work, how they can fail, and the effects of failures.

They are not preventive systems like exhaust gas recirculation (EGR) which reduces the formation of pollutants during the combustion process, or crankcase ventilation systems which prevent crankcase vapours from reaching the environment. Instead, diesel exhaust aftertreatment systems reduce pollutants after they have been produced.

The exhaust enters the diesel oxidizing catalyst (DOC) where HC and CO emission levels are reduced. This oxidizing process is similar to what occurred in the two-way catalysts on gas-powered cars of the mid-1970s. (Starting in the 1980s, gasoline vehicles employed a three-way catalyst that also lowered NOx emissions.) 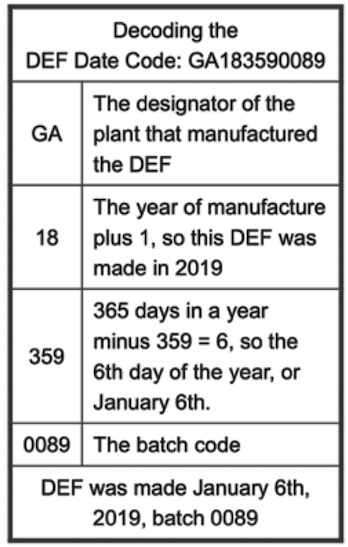 In the modern diesel exhaust aftertreatment system, diesel exhaust fluid (DEF) solution is injected into the exhaust stream in a spray of tiny droplets. The diameter of these droplets range from 100 to 200 µm. (For reference, a human hair ranges from about 25 to 181 μm in diameter.)

From there, the exhaust works its way through the selective catalytic reduction (SCR) catalyst, which uses the DEF to create a chemical reaction to reduce NOx emissions

Finally, the diesel particulate filter (DPF) traps PM to prevent it from entering the atmosphere.

Throughout, the system is chock-full of sensors to confirm and regulate proper operation.

While the DOC is not much different from the two-way catalyst on a 1977 Chevy Impala V8, the SCR is very different in construction and function from a typical catalytic converter. The SCR only reduces NOX and it cannot perform that function without the Diesel Exhaust Fluid (DEF) spray at the inlet side of the SCR.

The DEF solution spray vaporizes and decomposes to form ammonia and carbon dioxide. When the ammonia vapour is introduced to the NOx gas, it converts it to nitrogen and water – a harmless byproduct.

DEF is the reactant necessary for the functionality of the SCR system. It is a carefully blended aqueous urea solution of 32.5% high purity urea and 67.5% deionized water. (The DEF fluid is from the same family as urea fertilizer and bovine urine. But don’t try to collect your own fluid to save money. It won’t be of the proper purity or concentration. That’s no bull!)

DEF needs to be properly stored in a cool, dry, well-ventilated area, out of direct sunlight. At room temperature, DEF can be stored for two years. Keep it between -12 degrees C and 32 degrees C and it will last at least a year. Let that temperature rise above 32 C and the DEF shelf-life drops. So don’t buy a two-year supply at Costco and then store it in a greenhouse!

However, as you might expect, some people have made the mistake of dropping DEF into the diesel tank. This will result in a stalled engine and a very expensive repair bill.

Problem areas of the DEF system include the DEF reductant pump, the tank heaters (DEF won’t flow if it freezes – and it will freeze at -11 degrees C), and the spray nozzle which can clog up with crystalline DEF. Either issue will cause DTCs and continued driving with DEF issues can put the vehicle into several levels of reduced power; the final level of reduced power will result in a top speed of about 8 km-h.

So tell your clients to keep that DEF tank full of fresh DEF and they won’t get into a ‘DEF jam.’

PM reduction – which most people think of as ‘soot’ – is probably the most visible part of the current diesel emission standards. Some of the particulates are reduced by precise control of fuel mixture, injection timing, and exhaust temperature. But any PM that makes it past everything else hits the diesel particulate filter (DPF).

That amazing piece of engineering can remove more than 90% of particulate matter carried in the exhaust gases. It uses a filter substrate consisting of thousands of porous cells to trap the bad stuff. And it keeps on being amazing right up until it gets plugged.

To prevent plugging – and the trouble codes and power loss associated with that – the system will automatically go through regeneration to “burn-off” the soot loading in the DPF.

The ECM/PCM monitors the amount of soot trapped in the DPF. Too much soot plugs the exhaust, triggers DTCs. If allowed to degrade too much, it will cause the vehicle to go into reduced power ‘limp’ mode.

On a scan tool you can see this soot accumulation expressed as either grams or percentage. When the number gets too high for the good of the system, the ECM/PCM will raise the temperature of the DPF. It will inject extra fuel into the exhaust stream via an extra injector. Or it will alter the injection timing. In some stationary-engine cases, it will employ electric heating elements. Either way, the elevated temperature will burn away the excess soot.

The automatic regeneration process typically happens with little fanfare. The driver may be totally unaware it is occurring. But if it doesn’t happen normally (engines that idle a long time or operate at low-power levels won’t be able to successfully perform a regeneration, resulting in high soot accumulation and DTCs), then you need to force regeneration via a manual “service regeneration.”

A scan tool is required for service regeneration. Commanding a service regeneration is accomplished using the output control function. The vehicle will need to be parked outside the facility and away from flammable materials, vegetation, other vehicles, and buildings, due to the high exhaust gas temperature at the tail pipe (around 315 degrees C).

So glad I still have my 07 gmc classic diesel

I prefer my clean burning, non stinking diesel. A regen uses about 10 litres of extra fuel l estimate. And happens once every 800km on my F350. That's about 8% extra in fuel due to regens. The DEF cost is pretty marginal. The cost of repairs to this system is stupid though and a delete is usually the way most people go.

I deleted my 2020 Cummins and was the best move honestly. Last year pulling exact same load on the same trip i gained an Extra 150+ KM to a tank. At the price of diesel right now that is a significant savings. I still am not convinced that the Carbon footprint that DEF itself creates vs not having it is saving the environment. Considering the carbon it takes to create the DEF, Transport the DEF, the extra fuel it uses to run the DEF system and not to mention the carboard box, plastic jug that it comes in being created as well as ending up in a landfill somewhere. Just my my hillibilly two cents on the subject.

There's a reason nobody wants to hang out anywhere near the tailpipe of a non emissions truck. Some nasty stuff coming out of there. Does all the energy and materials that goes into making it clean make sense? I don't know.

I dont want to hang out near any tail pipe, emissions controled or not.

Cant smell that chit when your in the cab going down the highway though.

If youre not going anywhere shut that POS off already lol

The emissions equipment on the newer trucks seems to be significantly more reliable than the older ones. I deleted my 2014 F350 while still under warranty because I was having issues with soot passing through the DPF, regens every 200km, and the local Ford dealers not wanting to look at the truck because the check engine light wasn't on. I miss not smelling diesel exhaust, and my fuel economy didn't improve very much at all after the delete.

My wife's 2018 Diesel Colorado is much better, it had a couple issues with the DEF lines freezing but GM had upgraded parts for these and replaced them under warranty. Otherwise the truck is quiet, doesn't stink, the tailpipe is as clean as the day it drove off the lot, only uses a jug of DEF every oil change, and still gets awesome fuel economy. My dad has a full size Duramax of the same year and hasn't had a single issue, and he gets way better fuel economy than my F350 does.

My dads 2021 duramax has emissions problems. And you cant even get parts to fix it.

ABMax24 said:
The emissions equipment on the newer trucks seems to be significantly more reliable than the older ones. I deleted my 2014 F350 while still under warranty because I was having issues with soot passing through the DPF, regens every 200km, and the local Ford dealers not wanting to look at the truck because the check engine light wasn't on. I miss not smelling diesel exhaust, and my fuel economy didn't improve very much at all after the delete.

My wife's 2018 Diesel Colorado is much better, it had a couple issues with the DEF lines freezing but GM had upgraded parts for these and replaced them under warranty. Otherwise the truck is quiet, doesn't stink, the tailpipe is as clean as the day it drove off the lot, only uses a jug of DEF every oil change, and still gets awesome fuel economy. My dad has a full size Duramax of the same year and hasn't had a single issue, and he gets way better fuel economy than my F350 does.
Click to expand...

My 2020 Cummins had nothing but issues. Eventually they didn't want to fix it under warranty as well as they never had the parts.....didn't want to be stuck with a $95,000 paper weight as its my only vehicle at the moment so had to delete it with 25,000 KM on it.
S

Knock on wood.. the last 4 -6.7 fords have worked flawlessly. I am no greenie but I sure do notice when around a deleted truck now.

My 17 and 11 f350s are deleted with a good clean tune next to no smoke on hard accelerations, fuel economy usually between 800-1000 kms per tank now, used to be 19-20 litre per 100 empty on ym 17 now i get that pullin a trailer, def is a joke and these new emmisions are killing the truckin indurstry used to get million plus miles on a motor now lucky to get half that

sirkdev said:
Knock on wood.. the last 4 -6.7 fords have worked flawlessly. I am no greenie but I sure do notice when around a deleted truck now.
Click to expand...

It is nice! I can’t stand being stuff behind a 6leaker at a red light. These new ones you don’t smell them
You must log in or register to reply here.
New posts

Demand for diesel vehicles is increasing

Volkswagen To Spend Up To $14.7 Billion For Deceiving Customers